In 2011-2012 Ouke and Hanneke Dijkstra helped an Australian foundation set up a bakery in Uganda. Unfortunately, this foundation stopped after a number of years and so we found the bakery not working at the beginning of 2015. That was when they started working for us under the banner of the UIC and KHAP.

To create employment and food security, it was decided to make the bakery part of Kumi Hospital AgroPark. A reboot was initiated. After several months of preparation, including refurbishing the bakery space by local workers, purchasing materials from the capital Kampala and flour from the area, the bakery was reopened in October 2015 under the name KHAP Cake & Bread.

The bakery is very basic with a wood oven and use of fires outside. All work is manual, except mixing the bread dough. A motivated and enthusiastic team makes it possible that there is fresh bread in the region. 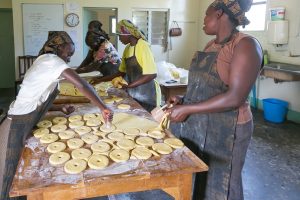 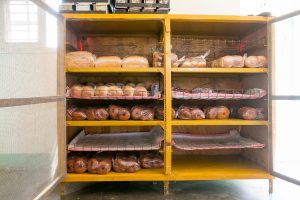 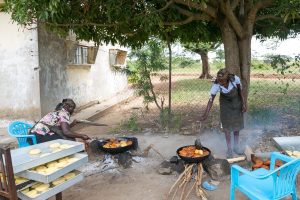 The team bakes breads, sandwiches, local donuts, Mandazis, muffins and cakes to order almost daily. Products are delivered and sold in the area in a specially built large container on the back of the bakery moped (boda).

From the end of 2015 to the beginning of 2019, Ouke and Hanneke trained and supported the local staff in running the bakery independently, a great challenge that they really enjoyed. The era at KHAP ended for them in 2019 and they returned to the Netherlands. The efforts of Ouke and Hanneke are greatly appreciated to this day and we continue to elaborate on what they left behind. 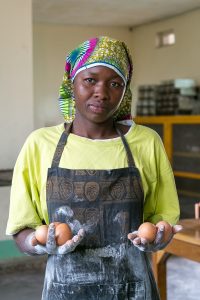 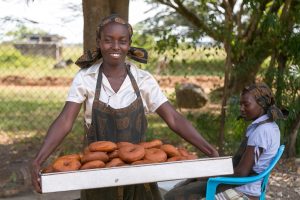 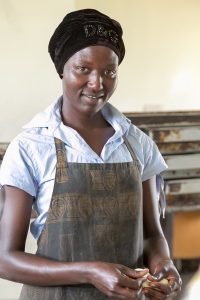 Bakery staff is now headed by Kevin and Grace and consists of 4 ladies for baking and 2 male salespeople for sales and distribution. Competition from other bakeries, even in the relatively remote areas we serve, is increasing. We are lucky to have a number of larger and reliable clients such as Amacet Childrens Home in Soroti, Kumi Hotel and the Guesthouse at the hospital.

One of the challenges is to simultaneously reduce costs and improve the quality of the products. In the last months of 2019, the quantitative focus has shifted from donuts to mandazi and this has proved to be successful. Mandazi are very popular and therefore sell well. A new bread has also been developed which customers are very satisfied with.

At the moment the bakery is still open and the team is working hard to keep making sufficient turnover. Fortunately, despite the corona measures, the boda is still allowed to drive and the demand for products from the nearby area has increased. As a result, the bakery still ensures a well-functioning part of KHAP and an income for the employees and their families.